Building of the Capitol Timeline

1861--Ritchie block at the corner of 6th and Kansas; on the 3rd floor the Senate meets for three years.
(The Ritchie block, built by John Ritchie , Dr. Andrew Ritchie, Walter Oakley, and LC Willmarth burned in November of 1869, gave impetus for the first Volunteer Fire dept in Topeka in 1870.)

House of Representatives meets at the Crawford opera house, moves to the Congregational church at 7th and Harrison due to a roof leak. (Congregational Church was organized as a anti-slavery church)

1863--House of Representatives meets at the Methodist Church on Quincy between 4th and 5th streets ( organized in 1885, lots given by the Topeka Association )

1864-1869 Constitution Hall--Statehouse Row
The old Constitution Hall (what is the only remaining part of Statehouse Row) is incorporated into a new building with a new front.  The front of the building was 100 ft,with part of the building being 42 ft deep and part being 44 ft deep (due to the incorporation of existing building).
The first story has 8 rooms which include the Supreme Court and it's clerks, the State Auditor, Treasurer, and Secretary of State offices, law library and the miscellaneous library. Ceiling height was 14ft..
Second floor was the Governor, Attorney General and Superintendent of Public Instruction and the Legislative Halls.  Ceiling height was 12ft.
Building was erected by Theo Mills, JG Gage, Loring Farnsworth and WL Gordon.
State leased for $1,500/yr.

1866--
State House Commission likes limestone found near Manhattan but the site was not accessible by rail; and opts for sandstone from the banks of Deer Creek, Topeka.(near the Vinewood)

Winter1869--East Wing Completed (minus front stairs which are completed in 1873, and there were temporary stairs, walkways and privies--indoor plumbing was not part of the original plan)
Steam heat and gas lights.
Plaster work was done by the firm of Paul and Hopkins.
Cost estimated at $371,000.

March 1903--The Capitol is Completed. 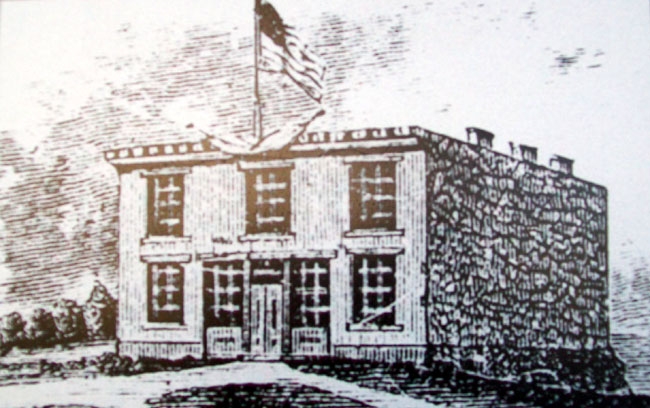 This is a drawing of what Constitution Hall looked like at the time of the Constitutional Convention.  Hopefully, sometime this fall work will begin to return the front to this facade, if not this fall, it will begin in the spring.  Although through grants (from the NPS and KSHS) and private donations the facade will be done, the building lacks about $300,000 from completion at which point it will be open to the public. If you are interested or would like to become a friend and help this happen here is the website   https://www.oldkansascapitol.org/in-history.