A "Kingmaker's" home. Morton Albaugh's residence, which is within a block of the black church---Lane's Chapel, This was on the edge of the 3rd ward and a couple blocks from "Mudtown"--the city's SE section( according to Needham's Pocket Map of Topeka 1882) This house was built for Albaugh , a newspaper owner, clerk of the US District court, head of the KS Republican party from about 1898 through the teens.  (1331 Harrison)

Albaugh was a cohort of William Allen White and Cy Leland (the "boss" of the Kansas Republican party from Doniphan County).


Morton Albaugh, clerk of the United States district court, at Topeka, was reared a farmer boy in Martin county, Indiana, where he was born, Feb. 10, 1862, and is a namesake of Indiana's great war governor, Oliver P. Morton. He is a son of Samuel Albaugh and wife, Leah Slates, both of whom were natives of Carroll county, Ohio, and were married there in 1852, removing from there to Martin county, Indiana, in 1853, where the father is still living and has resided for nearly sixty years; the mother having died in February, 1910, aged seventy-nine years. They were the parents of eight children, four sons and four daughters, all of whom are living and reside in Martin county, Indiana, except Morton, and a sister, Emma, who resides in Colorado. Named in order of birth they are: John Perry, a general merchant at Shoals; Jane, who is Mrs. Jacob Ruggless of Shoals; William C.; Oscar; Morton; Martha, who is Mrs. Charles Dowell; Emma, who is Mrs. George Truax of Breckenridge, Col.; and Mary, who is Mrs. James Williams.
Morton Albaugh was educated in the district schools of Martin county and in the Southwestern Normal College, at Mitchell, Ind. In early manhood he taught five terms of school, beginning that vocation at the age of sixteen. When nineteen years of age he became principal of the schools at Amo, Ind., and served as such two years, after which, in 1883, when twenty-one years of age, he came to Kansas and for one year was principal of the public schools at Kingman, Kan. He then turned his attention to newspaper work, having purchased the "Saratoga Sun," and continued to publish that paper at Saratoga, Kan., for nearly three years, or until the town had practically ceased to be. He then returned to Kingman and purchased the "Kingman Leader." A year later he purchased the "Courier," of the same place, and consolidated the two papers into the "Leader-Courier," of which paper he was the owner and editor until January, 1909, and of which he still retains an interest. Mr. Albaugh took a lively interest in politics as a Republican from the time he came to Kansas and is recognized as one of the most able and astute politicians in the state. He became a member of the Republican state central committee in 1890, and continued to be a member of it continuously until 1908, being its chairman six years. In 1904 he was one of the active supporters of E. N. Morrill for governor, and after the latter's election Mr. Albaugh was made president of the State Board of Charities, serving as such two years. In 1898 he had charge of W. E. Stanley's race for governor and was made the chairman of the state Republican committee that year; he was reëlected chairman of that committee in 1900 and had charge of W. J. Bailey's canvass for governor in 1902, which resulted in the election of the latter. Later Mr. Albaugh for the third time was made chairman of the state Republican committee, the only time that any man has thus been honored in this state. In 1900 he was appointed bank examiner by Governor Stanley and served in that capacity nearly four years, resigning in 1904 to accept his present position, which is that of clerk of the United States district court, having been appointed to that office by Judge John C. Pollard.
On Sept. 28, 1890, occurred the marriage of Mr. Albaugh and Miss Eula L. Houghton of Loogootee, Ind. Mr. Albaugh and his wife have two children: Houghton, aged eighteen, and Kathryn, aged sixteen. Mr. Albaugh is a Thirty-second degree Scottish Rite Mason and a Knight Templar. He is also a member of the Knights of Pythias, the Benevolent and Protective Order of Elks, and the Ancient Order of United Workmen. 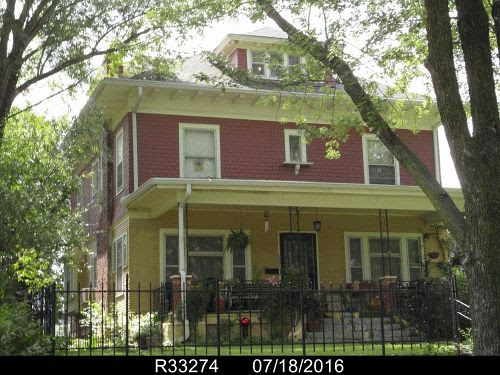 Posted by Christine at 5:25 AM