The projector (yet another wormhole) 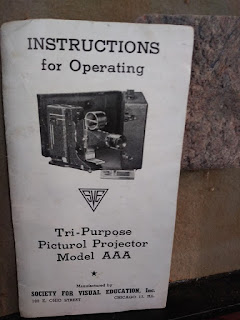 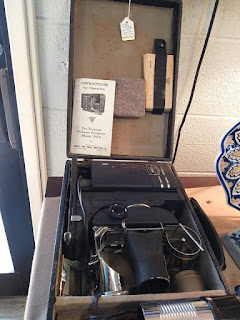 Volunteering at Findables, the Midland Hospice Resale Shop, last night I  found this.  Still in the box with the instruction book, this is an early projector, in great condition (I would say mint). About the Society for Visual Education, "Multimedia publisher. Founded in 1919 by Harley L. Clarke a utilities magnate and Forest Ray Molton, an anatomy professor at the University of Chicago, in the form of a medieval guild. The aim to produce films for use in schools. Within three years the company was failing. Clarke sold the company to Marie Witham who continued the business on a smaller scale. In 1923 she introduced the Picturol range. Maintains largest slide film library. Continued until 1995." from the Smithsonian. The obit that I found for Ms. Witham disagrees with this but obits are written usually by family after the death and I am guessing the Smithsonian citing is correct, but I am going to keep working on it.  And below that is an ad I found for the projector from he Charlotte Perkins Gilman Digital Collection at Radcliffe. (Gilman, best known for her feminist work the Yellow Wallpaper) She kept scrapbooks (I love scrapbooks, they are treasure troves and a real eye into the mind of the creator...voyeristic, the loss of scrapbooks, diaries obits....)Unfortunately for me, this is identified as being part of her pre-1935 collection but I cannot find any identifying the date of the ad itself.

Posted by Christine at 3:47 AM