Up early, as usual, working on the Nick Chiles project.  I am deep in the year of 1897 and Nick has just purchased the three story building that will be Chiles' for the next 30 years.  He bought it for $6,200 from T.G. Shillinglaw and it was known as the "Case"building.  I haven't looked it up yet but I am betting that it was built by the  "Hib" Case--an early Topeka attorney and a cohort of James Lane (he is buried at Topeka Cemetery--Lisa Sandmeyer does a great tour which includes him). 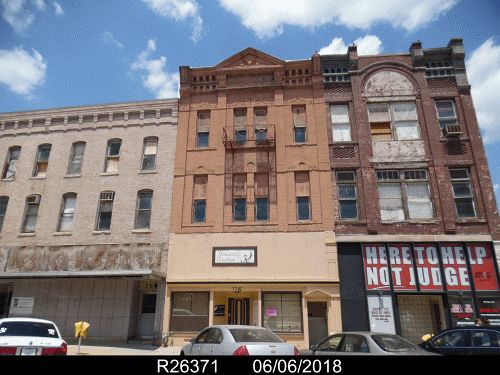 This is from the the appraiser's website. Chiles' hotel is the most non-descript of the three and the farthest to the left.  I think that Chiles' eventually buys all three of these buildings but I am not there yet..  The Chiles hotel opened on January 1st, 1897--with some 200 people coming out for dinner at a cost of 25cents--evidently, beer and port wine were served--openly and advertised on hand bills which created quite the controversy in a dry state. Papers as far west as Stockton have pieces in the paper about it ,C.K. Holliday, who was on the Board of Police Commissioners at the time, writes a letter to the editor defending the police decision not to stop the sale--Chiles was technically not selling alcohol, he was giving it away and an emergency meeting of the WTCU ( Women's Christian Temperance Union) is  held--they decide that they cannot do anything and to try with the new slate of Populist politicos coming in, to hold the police to a higher standard.

Chiles was never one to play it safe, doing it was one thing, but advertising was a bold move. Could be called flaunting it.  There were 11 furnished rooms which rented for $1.00/week.  After Chiles gets the paper quite often the guest register will appear in the society pages.

Currently, this is owned by "AIM Strategies" who own several other properties downtown.  From what I can tell by driving by (I may go by today for more pictures) they are not doing anything with it.  Sad. When I first came to town, on the first floor was Custom Photographic--I remember taking film there (I had a Pentax K-1000--I wish I knew what I did with that camera, I would like to play around with it again--black and white rules) and get back cut sheets with the strips of negatives in a waxy paper sort of sheet and then I would use a grease pencil to indicate the photos that I wanted developed.  Neat place.
Posted by Christine at 3:14 AM