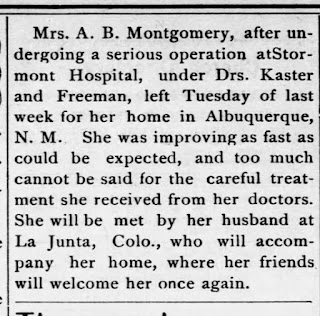 I have wondered where black people in Topeka went for medical care. I even put this question for on Topeka History Geeks,

"There are quite a few mentions of the Douglass Hospital in KC in the Plaindealer, but I wonder was there a black hospital in Topeka? Where did blacks go for medical care here?"

I can't imagine them being turned away from Christ's Hospital, but I don't know for sure. Ellen Vail set that one up to provide care regardless of ability to pay. I don't know if the Episcopal Church would have had an official stand on race at that time.--Lisa Sandmeyer

This article is not conclusive, because the Plaindealer does have white news in it, eg. such as the North Topeka section, but it is a start, and gives me a trail to go down.  Hospital at this time was a different thing than it is now.  I have found and have pictures of several "hospitals" that were the doctors private home and he had say 6 bedrooms that became patient rooms.  From what I can tell this practice continued until the 1920s---it was certainly a practice during the Spanish flu era, it is easy to find newspaper clippings in that period with "home hospitals.'  I have sent an inquiry to Stormont Vail, we will have to wait and see.
Posted by Christine at 3:48 AM