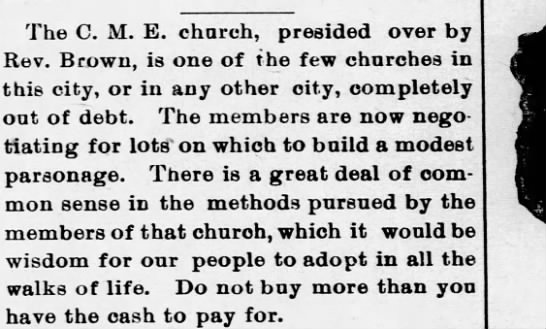 Another of my finds and a wormhole. The CME church that Chiles' is talking about in this piece was Lane's Chapel at 14th and VanBuren.  I do not know where this was located between approx. the turn of the century but in the 1970's it moved to 16th and Harrison and was there until the 1980's. (Topeka Capital Journal, October 27th, 2013 " The old building, which was built in 1920, was home to the former Trinity Methodist Church through the mid-1960s. It then was taken over by Lane Chapel Christian Methodist Episcopal Church through the 1970s and into the early 1980s.")At that time it appears to have moved (merged??) to 12th and Lane. The stone church at 12th and Lane is another of my favorite buildings in town.
I
I posted pictures and I have no idea why one picture is so much larger than the other but you get the idea.  Anyhow, this post is to earmark this to look into more later.   And FYI, this church should definitely be on the National Register.
I

Here is a picture of the church where Lane's Chappel was during the 1970s/80..

Lane's Chappel as it is today at the corner of 12th and Lane.

Posted by Christine at 6:11 AM