Small article on the bottom on the second page of the PD about J.M. Christopher, the editor of the Tampa Record is shot dead and nothing is being done about it.  A quick google search returns nothing.  But, I did find this article on the history of blacks in Tampa...http://scholarcommons.usf.edu/cgi/viewcontent.cgi?article=1363&context=sunlandtribune.  But, a lot of these lynchings/riots are not easy to find, they are not in my books  The Encyclopedia of American Race Riots.  I am reading the Plaindealer but I would love to read other newspapers of the time and compare, was Chiles/Childers unusual for a black newspaper of the time?  they seem very outspoken to me but is that perception not reality? or are they unusual and that is why they had such wide readership?  I am presuming that they had wide readership--in the society page now, six months into the PD's publication there is a correspondent and news from as far as Cincinnati Ohio.  How did the PD get that far?  was it like the Defender and sold by railroad porters?  How did the PD get all of the papers that they reprint from?  More questions that answers.

I have been posting interesting bits on my facebook page here bits that I have found out..
From Lisa Sandmeyer on illustrations (the PD has lots of illustrations--almost every paper has at least one)  " A paper I worked for in the 1980s had three artists. One was out for lunch and news happened right in front of him. There were no cell phones to call a photographer, so he went back to the office and drew the scene"

Eric McHenry on the Langston Hughes family (I have been sending him all the bits I find on them, hopefully I am not annoying him, but I know that he is doing research on this) " That's her! She became Carrie Hughes in the summer of '99. Mollie Langston was principal of the Douglas School, in the Lowman Hill area. She was the estranged (I think) wife of Langston Hughes's uncle Des.
This is one of the more interesting LH-related items in the Plaindealer, because of its tone and the timing of its appearance. Suddenly, in the summer of 1899, Carrie and James announce that they secretly got married back in late April. Then, in late January or early February of 1900, Carrie gives birth to a baby (who did not survive, sadly). Unsurprisingly, some people suspected it had been a shotgun wedding. I *think* Arnold Rampersad authenticated their wedding date of April 30, but I'm not positive about that. And it still might have been a shotgun wedding."


Chiles/Childers dedicate 2 out of the 4 pages of the paper on July 7th, 1899 to the Epsworth League--a Methodist youth organization and the Eastern Star.  For the PD which typically is not pro-church and very political/race based this is unusual.  Childers gives reasons in his editorial, but it is interesting.  It is also interesting to think about does the paper reflect the views of the publisher or the editor?  How involved was Chiles as business manager/publisher?  Do we ever see Chiles' writing or is the strikingly bold writer Childers or it is someone else???

"The Negro Question" article that appeared in Popular Science monthly is a continuing discussion theme in the PD.  Here is a link to save for later..https://en.wikisource.org/wiki/Popular_Science_Monthly/Volume_55/June_1899/The_Negro_Question.  Like all research this leads to more questions than answers and the reading is like pulling a string, the more you pull the more you realize is still in the ball.

A society wedding in Washington is detailed.  The groom wore  a "Prince Albert"suit. 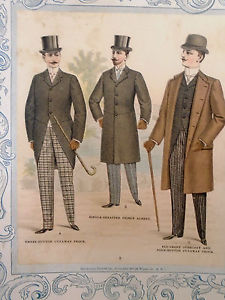 Posted by Christine at 4:10 AM