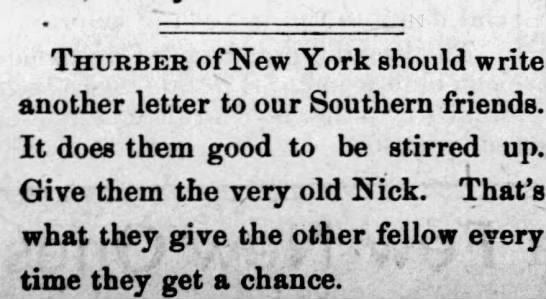 This blog is rapidly becoming unanswered questions and interesting things to come back to but for now I have to stay focused on the prize.  I have no idea who Thurber is.  It caught my eye, got in the catbird seat because of my fondness for James Thurber, who was best known for his New Yorker cartoons, and this clip fits him.  But, James Thurber of the New Yorker was born in 1894, pithy, witty and brilliant though he was, I doubt that at 5 he displayed quite that command of language.  Googling I found LOTS of Thurbers who lived in New York (state) in the late 1800's --none seem to be writers but there were TONS of small papers and Chiles and crew  judging from their reprints, seem to have been voracious readers of newpapers .  One of the more interesting Thurbers I found was John Thurber, a pirate trader and slave active off the coast of Madagascar in the 1600s, obviously not my Thurber.

Cross promoting with Hudson.  Interesting .   Chiles publishes a society column on North Topeka, which was primarily white.  And reprints from Capper's Mail and Breeze regularly.

I don't know who this is either, but I suspect that I will find out in later issues.

Posted by Christine at 7:21 PM